Sydney based photographer Leila Jeffreys doesn’t shoot your typical portraits. Sure her portraits feature handsome, intelligent, poised characters but you find wings where you expect to find arms, all because of Leila’s fascination with our native Australian birds.

Leila’s interest in birds doesn’t quite reach ‘twitcher’ status but it has led to her to produce a series of portrait shots titled ‘Biloela – Wild Cockatoos‘ and ‘Portrait of a Budgerigar‘. This year Leila incorporated some of her Cockatoo portraits into a witty book titled ‘Interview with a Cockatoo (or Two)’ which won the Peoples’ Choice Award for the 2013 Head On Momento Photobook Awards. She graciously agreed to answer a few of my questions to give us an insight into her work, life and passion for bird photography and conservation.

How has your upbringing influenced your Fine Art photographic style?
When I was little I had a lot of interaction with animals whether it was seeing them in the wild, rescuing injured wildlife with my Dad or simply being around family pets. I was the youngest child and had an active imagination so to me animals were my friends and I always saw them as ‘people’. Capturing a strong portrait of a person involves tapping into their character and I think animals are no different.  It’s how I had always seen them so I guess that is how my photographic style developed without realising there was something unusual about it. 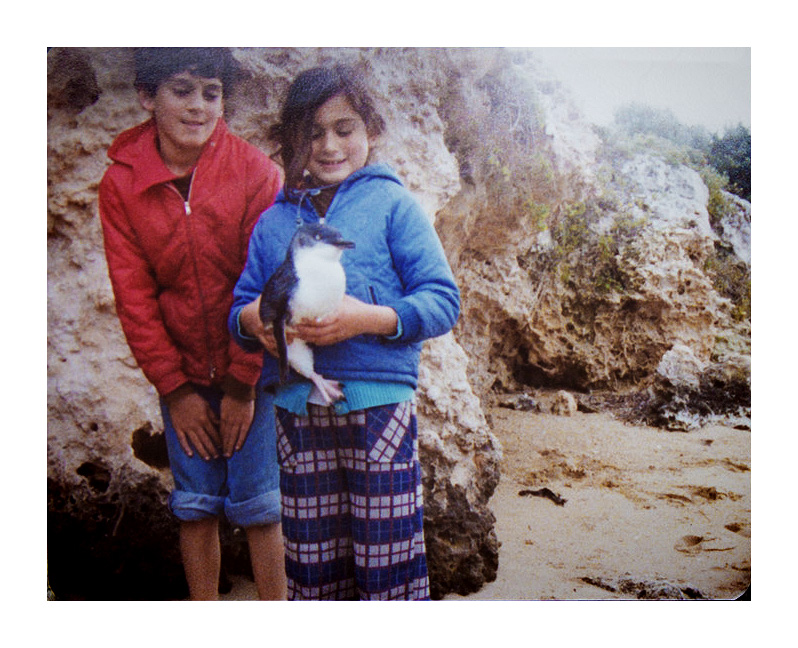 As a child, Leila Jeffreys was a keen wildlife conservationist

How did you start out as a photographer and what have you learnt along the way?
I began studying photography at school, continued through university and a full time Certificate in photography at TAFE. For years I took photos, mainly of bands or portraits of people for magazines. The work I was producing was never as good as what I wanted and I often felt self-conscious which meant I wasn’t really connecting with who I was photographing. My photos were OK but they didn’t have that special something, so I gave it up to become a Photo Editor. I always had a camera in hand though. I loved taking photos and just couldn’t shake it.

For a long while my photography was purely for personal projects. Then one day I became obsessed with this idea to photograph a beautiful budgie and print it human size, to hang in my home, as a tribute to a budgie I had as a child. It was a simple idea that ended up as a series of 15 budgerigar portraits taken over two years, and my first solo exhibition.

There are three things that I have learnt;
1. I am still not very good at photographing people!
2. I love photographing animals because I am so enamored with them that during a shoot nothing else matters. I am able to simply be in the moment and enjoy their company like two people getting to know each other for the first time.
3. That getting to the point where you produce work that you’re truly happy with is all to do with a lot of hard work. 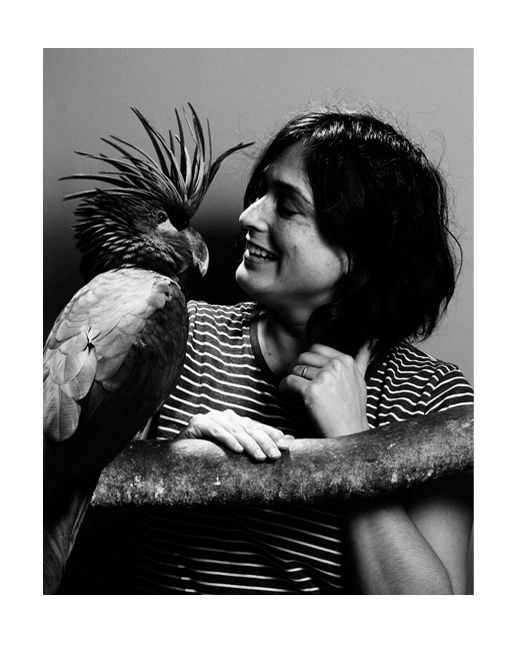 Tell us a bit about your project ‘Biloela – Wild Cockatoos‘
We live in a country with the most phenomenal native birds but it felt like it a secret that only birdwatchers knew about. Anyone that spends time really observing wildlife can’t help but see the wonder in them. I wanted to capture that wonder and show it to the world. Establishing a connection to wildlife reminds us that we share the planet with amazing creatures and we need to ensure they always have a home.

I wanted to focus on one species of parrot and chose cockatoos because they’re the most human-like of all birds. I set myself the difficult task of photographing every major native cockatoo species in the country! The hardest bit was getting access to each species, so I worked with wildlife rescue groups… if a bird came into care I would photograph it before it was released … then with wildlife parks, zoos and private breeders who were heavily involved in conservation programs.

What techniques do you use to snap a great cockatoo portrait?
It really comes down to making sure that the bird is comfortable and that we bond in some way. The best example is when I photographed Seisa the Palm Cockatoo. That shoot still gives me heart pangs when I think about it. She was so sweet and quite shy to begin with but she was also incredibly curious, and had a strong desire to communicate with me. As the shoot progressed we bonded so strongly she would come and nuzzle into my neck. When we achieve that level of communication, I’m most likely to capture a great portrait.

You’ve had a number of exhibitions nationally and internationally but why did you decide to present your photos in a book?
Some people who visited the “Wild Cockatoo” exhibition expressed an affection for particular birds, and had their own interpretation of the birds’ personalities and back-story. I loved this!  It was so unexpected and made me realise there were so many ways to view them. I chose one portrait per bird for my exhibition and that limited the number of images I could use, so I wanted to create a book with more images that I loved but couldn’t exhibit.  I also wanted to do something that was creative and a bit of fun.

My friend Todd Sheldrick introduced me to the book ‘The Frenchman,’ published in the 1950s. The book is about a French actor who can’t speak English so he answers the interview questions using just his expression. Todd, James (my husband) and I loved it and thought we could play with that notion but in reverse. By looking at the birds’ portrait we imagined what question had inspired that pose, or physical response . Sometimes it was about their expression but sometimes it was simply to do with the colour or markings of their feathers. It enabled me to be creative and add a narrative to the work.

Why did you choose these specific materials for your Momento photo book?
I love the orange linen. It reminds me of the curtains that Harry Seidler chose for his 1950s modernist masterpiece – the Rose Seidler house. It’s bold and beautiful just like the cockies. The black embossed stamp seemed to give the book a feel of professionalism which I loved too. 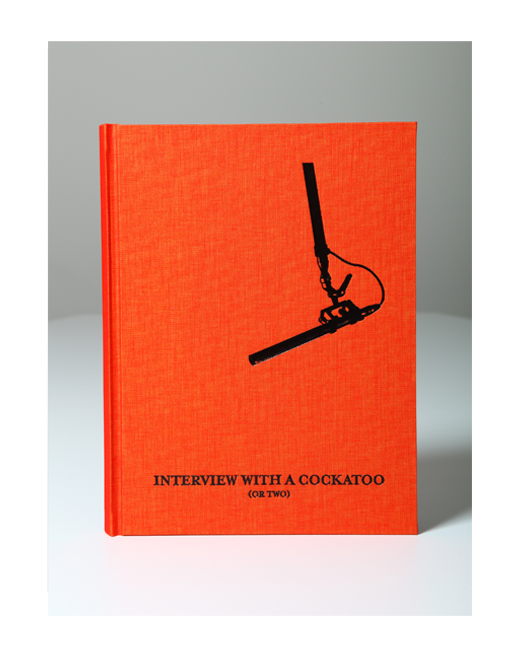 The front cover of ‘Interview with a Cockatoo (or Two).’ Hard cover Linen in Orange with a Custom Emboss in Black. © Leila Jeffreys

Which bird is your favourite and why?
I wouldn’t know how to answer that question. The experience of photographing each cocky has been so special to me, it’s like fond memories of people that you’ve met and they all make you smile.

What are you going to photograph next and why?
I’ve got several projects in mind but it’s very hard to know which one will be my next. Getting access to wildlife is incredibly hard, especially because I am very selective and only work with people involved in conservation and have the birds best interest at heart. So it’s a bit too early to tell. I am currently in the process of meeting different wildlife carers, doing my research, observing wildlife and taking lots of test shots. I’ll have to get back to you on that one!

What did winning the People’s Choice Award at the 2013 Head On Momento Photobook Awards mean to you?
When I found out I was so thrilled. It’s the award that I value the most! To me it must mean that people have affection for the cockies and that’s what it’s all about. It’s about the cockies; it’s not about me. It also means that people got the subtle humour in the concept of the book. Trying to put together a narrative that makes the reader smile is actually very hard to achieve. I hope people got what we were trying to do.

Are you selling copies of this book or fine art prints?
I’d love to get the book published one day and when I get some time I’ll start to approach some publishers. The cockatoos were exhibited at the Olsen Irwin Gallery in Sydney as large fine art prints, they’ve almost sold out but there are some editions left.

The 2013 Head On Momento Photobook Awards exhibition at the NSW State Library, Sydney

Recently I read this quote by writer Ira Glass, it applies to anyone doing creative work and it’s brilliant.

“Nobody tells this to people who are beginners, I wish someone told me. All of us who do creative work, we get into it because we have good taste. But there is this gap. For the first couple years you make stuff, it’s just not that good. It’s trying to be good, it has potential, but it’s not. But your taste, the thing that got you into the game, is still killer. And your taste is why your work disappoints you. A lot of people never get past this phase, they quit. Most people I know who do interesting, creative work went through years of this. We know our work doesn’t have this special thing that we want it to have. We all go through this. And if you are just starting out or you are still in this phase, you gotta know its normal and the most important thing you can do is do a lot of work. Put yourself on a deadline so that every week you will finish one story. It is only by going through a volume of work that you will close that gap, and your work will be as good as your ambitions. And I took longer to figure out how to do this than anyone I’ve ever met. It’s gonna take awhile. It’s normal to take awhile. You’ve just gotta fight your way through.”  —Ira Glass

Leila Jeffreys was a delight to interview and her portfolio of work can be viewed here.